BWW Interview: Gloria Reuben of BALLADS TO BOSSA at Feinstein’s/54 Below 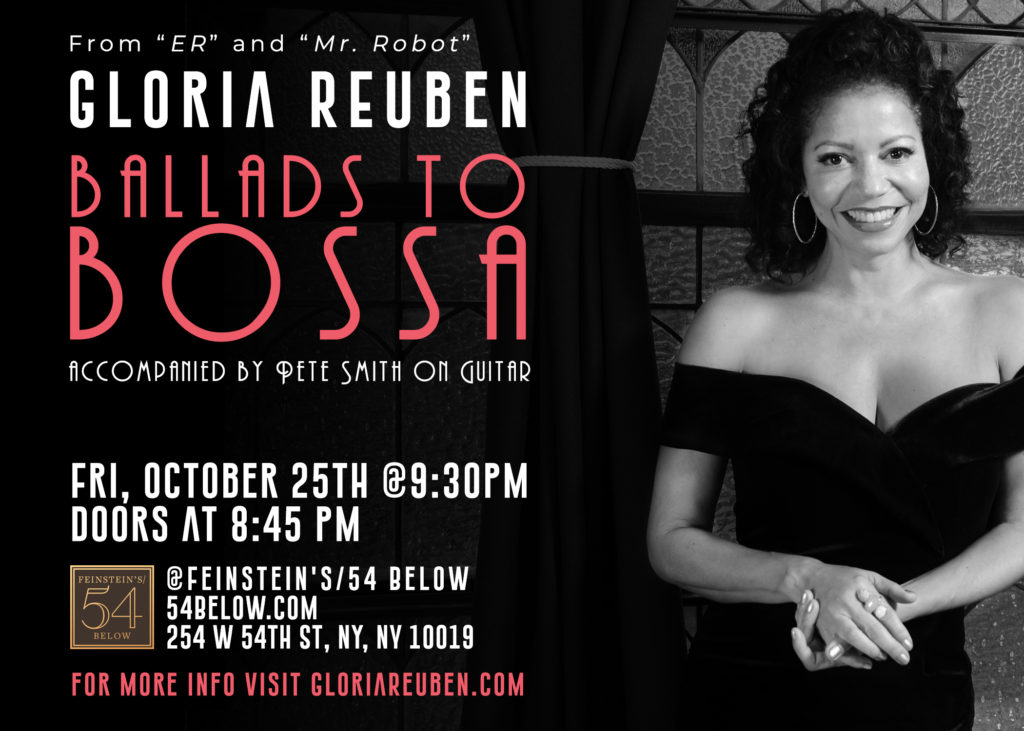 Gloria Reuben is a renaissance woman and a trailblazer. Long respected as an actress who makes bold choices in the art of acting and in her artistic career, Ms. Reuben’s gifts as a musician have always been an important part of her life, nurturing her soul and providing her fans with a personal and intimate expression of who Gloria Reuben is, as opposed to the strong women she has played in films like Lincoln and on TV shows like ER. With two cds under her belt (“Just For You” 2007, and “Perchance to Dream” 2015), Gloria Reuben will soon release a third one titled “For All We Know”. To coincide with the release of “For All We Know,” Ms. Reuben is making her London nightclub debut at The Pheasantry on October 6th, and making a return to New York’s popular cabaret room Feinstein’s/54 Below on October 25th, all the while continuing to work at her acting, as well as preparing for the November release of her first book, “My Brothers’ Keeper,” due out November 19th. This extremely personal book is a tribute to Ms. Reuben’s late brothers. Never one to let fear stand in her way, Reuben makes another bold choice in her life by deciding to open up and share her memories and her experience about the love that endures long after a loved one has died.

On October 1st I was able to get on the phone with Gloria Reuben and chat a little about all that is happening in her life, and though the reception on the call was nearly impossible for both of us, we persevered and managed to have a lovely visit, just hours before the premiere of the final season of Mr. Robot.

This interview has been edited for space and content.

I understand that Mr. Robot is having its’ season premiere this week, how are you fols celebrating that?

We are having a screening this evening, actually, and we are having an after-party which is going to be great fun. I’m looking forward to that, and early, first thing tomorrow morning I head off to London to do a show on Sunday, October 6th. I thought I’d get there a few days early.

Will this be your first time playing London?

My first time! I know! It is exciting! I’m really looking forward to it! It’s a little bit… like anything new, it’s exciting and I’m a little nervous. I know that the venue is a lovely venue. And I have some American friends who are going to be there at the same time so that will help me to feel at home, and I know I’ll have a great time.

The show at The Pheasantry and the one you’ll do later at 54 Below, are they the same show? Songs from your new cd?

They will be a little different. The one in London at The Pheasantry will have five tunes from my new record, and one of them I will do at the piano – but since this is my first time in London, I have my cd Perchance to Dream with me — I have hard copies of that with me. Unfortunately, I don’t have copies of For All We Know for London. But I’m going to kind of split the show for London, doing some tunes from Perchance to Dream and then doing some tunes from For All We Know, and then throw in a medley in honor of Nat King Cole and a couple of Frank Sinatra tunes — a lot f great music, a lot of fun music

For All We Know is your third cd and I understand it’s different from your first two.

It is. It is different in terms of it’s some of my FAVORITE ballads and standards. It is very different because it is just guitar and vocals. The last show I did at Feinstein’s/54 Below was The Men I Love which was piano and vocals. I always wanted to do guitar and vocals jazz CD, so this cd For All We Know is, if I may say so, a work of art that took some time in the making. Marty Ashby, the producer, and I took some time choosing the songs and creating unique arrangements for each tune on this record. I’ve done guitar and vocals for a while now but I wanted to create something that was new and fresh, but familiar. So… beautiful, fresh takes on songs like For All We Know and How High The Moon. I really can’t wait to share this with the world.

Since For All We Know is just you and guitar, and it’s the inspiration for your 54 Below show, I guess we’re not going to get to see you play the piano.

Yes! Actually I am going to do a couple of tunes on the piano on October the 25th at 54 Below – I’m not going to say which ones! (Laugh)

No, we can’t give it all away!

Yes, exactly! I have to say that one tune, in particular, this one ballad that I’ve been practicing at the piano as I prepare for October the 25th, which is really right around the corner, is really going to be…WOW. Let me just say this: the goal that I have for myself personally, creatively, professionally, when it comes to music is to take all three of these records that I’ve made that are so personal, and be able to handpick the tunes and go anywhere around the world and perform songs as they pertain to the book that’s being published in November. My book is called My Brothers’ Keeper. I’m creating a show that will combine partial readings from the book with the songs that are connected to the essence of the book. And, then my ultimate big picture goal I am working towards is to be able to take songs from any of my 3 albums, as well as songs outside those records, and for me to be able to go anywhere in the world and accompany myself on the piano and just, basically perform.

I’ve already started my second book! That’s not to say… obviously my intention is not to, in any way, decrease my activities as an actress, not at all. My creative pie is equal parts.

So first you will be celebrate your acting with the premiere of Mr. Robot, then your music when you open at The Pheasantry on October 6th.

It’s interesting because my show in London is the night that Mr. Robot premieres! (Laugh) It’s the first episode of the last season. I will have seen the episode tonight, but that’s not to say that I won’t be up till the wee hours of the morning in London, typing, as people are watching, live, the first episode! It should be interesting. So I certainly have been working hard and at the same time, I’m allowing things to unfold in the time that is right. And that time is now.

Well, you’re a strong modern woman, there’s no reason why you can’t do everything you want.

(Laugh) Yes, that’s exactly what I have to tell myself every morning! (Laugh)

(Laugh) It’s a good mantra is right! I love that!

Your mother was a singer, is that where you came by your love of the craft?

Yes, my mother was a singer. She was born and raised in Jamaica and she was very well known as she blossomed into being a singer there. People would come to church to hear her. So as I was growing up, music was always a part of my upbringing, particularly the piano. I took lessons as a young girl and I was 11, 12 years old – my father died at that time so it was a very difficult time, to say the least. But I always kept up with music. The piano, frankly, was a godsend. The piano was a godsend for me, particularly when I learned to sing and play at the same time, because it was the purest and most immediate emotional expression that was, frankly, the only constantly safe place to express my emotions. I will forever… as long as I can play and sing, I’ll always be happy.

You’ve done some significant work on the New York stage in the play Stuff Happens – is there any chance we could find you in a Broadway musical at some point?

I’ve gotten extremely close to a couple of things. It was very heartbreaking that it didn’t come through but at the same time, I have to keep on thinking that everything happens as it should. It is certainly, absolutely something that I have always and will continue to aspire to, and when the right musical project comes along, it will happen. Trust me, it’s something that’s on my radar.

So, excluding your mother and Tina Turner, if you had to pick a favorite girl singer, who would you pick?

OOH! You know I have a very eclectic taste of vocalists, male and female… I LOVE the soul and the strength and the sweetness of Oleta Adams. I love the rock country, sometimes somewhat heartbroken, but always hopeful lyrics of Sheryl Crow. But I think that my favorite… I would have to say that my favorite female singer that I can think of right now that is soulful, bluesy, rock, total rock, like rock your ass off is the band Heart. Those women ROCK. (Laugh). I swear to god, I love them so much. Two sisters, right? And how many female total ROCK guitarists … current day and Annie Wilson‘s voice! She can break your heart and she can make it soar at the same time. She can hit those notes! Full on, full throat! I can’t even take it. I’m in complete awe. That’s it! She takes the cake.

So you’re a wannabe rocker!

I WAS a rocker! (Laugh) I had a rock band when I was a teenager!

When a person is chosen to be one of People Magazine’s 50 most beautiful people, do they let you know in advance or do you find out when the magazine comes out?

(Laugh) Oh my gosh! I totally forgot! WOW! It was definitely one of those moments when you get a call and you’re surprised and you do a really fun photo shoot. I totally forgot about that, thank you for reminding me! (Laugh)

For all things Gloria Reuben please visit her Website