BWW Review: Gloria Reuben Touches Hearts in FROM BALLADS TO BOSSA at 54 Below 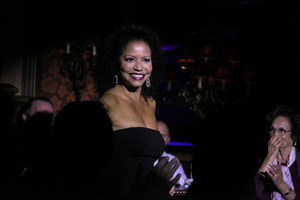 It has been said that originality is the ability to conceal your source. At her recent show at Feinstein’s/54 Below, Gloria Reuben wasn’t concealing anything; and make no mistake about it — Gloria Reuben is an original. In a black cocktail frock that some women would be afraid to wear, Ms. Reuben stood center stage in a big spotlight and shared her soul, her music, her self with an audience that craved her originality and hung on her every word. This time around, Ms. Reuben had no piano behind which to hide. There was no three or four piece combo to share the stage with her. It was just Gloria Reuben and guitarist Pete Smith on the stage at 54 Below, a stage that can look like a small stage with all those other people and instruments, but that looked enormous when populated by two tall slender people, there to lay bare their artistry and all that goes with it. In that big spotlight and that little black dress, Gloria Reuben could not hide it: she is a Lady, she is an Original, and she is a Star.

A mass of glamor, elegance, sophistication and chic, Gloria Reuben could easily come across as aloof, as many of the world’s most beautiful people can, if she weren’t so committed to honesty. Honesty is the quickest way to dispel any notion of detachment, and Ms. Reuben’s hour-plus on the stage was so honest that at times it felt like members of the audience might join her onstage for a pot of tea and some chat, a hug, or a turn around the dance floor. It wasn’t just the gentle and loving way that she spoke to the crowd, recognizing friends and fans and giving excited leaps on her rhinestone studded pumps, or the way she was unabashedly unafraid to stand all alone in the spotlight, moving her body in time to the music in a way that made you wish you could go out dancing with her sometime, it was the open pureness with which she sang her songs for the evening, with a palpable reverence for the composers’ work and an exposed love of their creations. When onstage, engaged in the act of singing (and, frankly, dancing), Gloria Reuben displays a musicality that isn’t seen every day; one has only to observe the personal reverie that takes over her, and listen to the perfect placement of the notes and impeccable breath control to know that this artist is playing an instrument as valuable and rare as a Stradivarius – only this instrument is called the Reuben. During this remarkable jazz session to which we were treated, I was reminded of a story I once heard Peggy Lee tell on a talk show.

When Peggy Lee was first starting out, a little unsure of herself, a little shy, she was in a nightclub singing and the rowdy crowd wasn’t with her. Noticing their seeming rejection, she decided that she may as well stop singing for them and sing for herself; so she took herself to a place where it was just her and the music, and her signature whisper style was born. As she stood there, whispering the song to only herself, the audience noticed something different about the girl on the stage and quieted down… they grew interest, they began to pay attention. She had them.

I don’t know if this really happened but it’s the story that Peggy Lee told, and it’s a good story, and it came back to me while watching Gloria Reuben sing on Friday night. It’s not that the audience wasn’t paying attention, because all held their breath all night; and it wasn’t that Gloria went to a place in the music to which we were not invited, because she kept us with her all night long. But it is clear that the connection between Ms. Reuben and the music is a personal one – she needs nothing else but the music to feel content. And what a gift it was for her to choose to share that intimate, personal connection with a room full of people.

Gloria Reuben shared something else with that room full of people: Pete Smith. Admitting that this was the first time she had ever worked with the guitarist occupying the stage with her, Ms. Reuben assured all that it would not be the last – a wise move on her part because Mr. Smith is something rare, fair, and fine, rather like Gloria Reuben herself. A consummate musician who makes an unsuspecting audience aware that his guitar is not his instrument – it is his partner, his friend, his musical mate for life – Mr. Smith exhibited skills that would make a symphony conductor salivate. A great couple, like Fred and Ginger, like Butch and Sundance, like Thelma and Louise, Smith and his guitar thrilled and enthralled; and with the two of them beside Gloria Reuben, something genuinely special happened on that big little stage at 54 Below.

A lot of something special happened on the night that Gloria Reuben sang for us music from her cds “Perchance to Dream” and the forthcoming “For All We Know,” not the least of which was the second best “Pure Imagination” ever sung (Gene Wilder‘s being the first) and a sweet, complete, swing-free, ballad-y “Fly Me To The Moon” that had people swooning. There were ballads turned into uptempos (“Time After Time”), a cheeky “I Get Along Without You Very Well” and the most humanity-laced “For All We Know” you ever dreamed of. Indeed, the humanity of Gloria Reuben was the most refreshing and welcome aspect of From Ballads To Bossa. While speaking from the stage about her pride for having been a part of ER (celebrating a 25th anniversary this year) and for the work created for her character, Jeanie Boulet, and her love for ER writer Neal Baer (in the house for the show) Ms. Reuben grew unexpectedly, gloriously, and humanly emotional. Tears filling her eyes, Gloria found assistance from members of the audience handing up tissues, napkins, and anything else to help keep her mascara from running. It was one of the real moments, the real human connections for which we all hope in club acts and in life. It was a gift, and it wasn’t the only time Ms. Reuben let her devotees see all the parts of her, for a discussion about her book “My Brother’s Keeper” brought more humanity and sharing from Gloria Reuben, as she remembered her two late brothers with much dignity and great love. Cabaret audiences and fans of celebrities are not often allowed this kind of personal connection and sharing, and combined with all the glorious music and the artists on the stage, it was an important part of what made From Ballads to Bossa a night of entertainment so rare and so original.

But that’s Gloria Reuben, all over the place: rare and original.

To learn about all things Gloria Reuben please visit her Website